IR35 is arguably the most debated issue in the world of UK procurement and HR. With rollout set for April 2020 but legislation yet to be published, some industry bodies feel that it’s too much, too soon.

It's fair to say the reform of the off-payroll rules, commonly referred to as IR35, is a contentious discussion point. A few weeks ago, UK industry bodies, including the Recruitment and Employment Confederation (REC), were calling for further delays to IR35 rollout in the private sector.

Consultation with the government up to now has clearly been far from successful. HMRC’s Check Employment Status for Tax (CEST) tool is not always perceived as being fit for purpose. IR35 legislation itself still hasn’t been published. It is understandable how the current situation leaves medium and large private sector businesses scrambling for clarity.

Little wonder that businesses, industry bodies and contractors are seeking a further delay to IR35 reforms in the private sector. Complex legislation such as IR35 is potentially huge undertaking to implement, especially as so many big organisations rely on contracted labour.

A 2018 report by IT Contractors UK revealed that there are 1.77 million people who are contracting on a full-time basis. The latest ONS data also reveals that self-employment is at record levels (15.1% of the labour force).

Whilst the private sector IR35 reforms don’t apply to small businesses, it is no small concern. This legislation will not only have a big bearing on businesses but will also impact a significant proportion of the UK workforce.

IR35 in the public sector

Implemented in 2017 in the public sector, the effects of IR35 reform are still being felt by contractors.

Despite assurances that a blanket, one-size-fits-all approach to IR35 would not be exercised, many contractors in the public sector discovered that they fell within IR35. Inevitably, this has led some of the most skilled contractors assessing whether public sector work is for them.

But for HMRC, IR35 will always be regarded as a success. As the reforms led to many contractors falling under IR35, HMRC will inevitably have seen a marked increase in tax revenue. Outside of HMRC, however, the response has not been quite so positive.

Late in 2018, a Lords report into HMRC’s powers featured especially strong criticism. It proclaimed the government's approach as “unfair”, “aggressive” and falling “well below the standard set in the Charter”. With pressure on contractors, a disorganised rollout and criticisms from professional bodies, industry professionals and the Lords, it should come as no surprise to learn that businesses are concerned about private sector reform.

The potential impact of IR35 legislation on businesses

The most marked results of the extension of IR35 rules to the private sector fall into two core categories: structural change and increased costs.

The structural impact of IR35 being extended to the private sector

As previously stated, IR35 reform in the public sector was far from smooth sailing. The concern for many UK businesses is that IR35 reforms in the private sector will lead to comparable complications. UK businesses currently utilise hundreds of thousands of contractors to facilitate BAU tasks, drive business growth and steer company departments in an increasingly complex, data-driven digital realm.

IR35 rules (if we are to assume that they will closely resemble those currently in place in the public sector) call into question the current structures of engagement with contracted talent. HMRC does have a tool, the CEST, which is claimed to help decide which contractors fall inside or outside IR35. The problem is that it’s accuracy is still not been approved, and the question remains: should the tool’s output be considered as writ?

There’s little wonder that the waters are somewhat choppy. Considering all of these factors collectively, it’s not hard to see why some public sector organisations opted for a blanket approach.

The financial impact of IR35

The structural changes required under IR35 will likely lead to increased spend, too.

First off, additional HR, legal and procurement resource will need to be directed towards preparing for IR35 reform. Whilst these functions are in most cases already embedded within businesses, time taken away from other core projects isn’t actually cost-free, and teams could become stretched.

The structural changes and their associated costs to a business are not to be taken lightly, but the central concern for most business leaders is the expectation that PAYE Tax and NI contributions under IR35 are expected to increase. For a contractor currently working for a business under a personal service company, that business is not liable for either PAYE Tax or NI. Under IR35, the likelihood is they will.

With over 1.7 million people in the UK working on a contract basis, this is no small matter. A large private sector company is likely to engage hundreds of contractors. IR35 rules are going to have a huge impact on their finances.

The exceptions to the rule

There’s not a great deal of positivity currently surrounding IR35 reform. But there are some unique cases where contractors will not fall under IR35.

If, for example, a contractor is engaged under an outcome-based SoW contract as part of a managed service programme (MSP), then neither the contractor nor the business will be liable for additional PAYE and NI contributions.

At present, outcome-based (as opposed to time and material based SoW) contracts are some way from maturity in most markets. Only the IT sector has actively embraced such solutions. This area of the market is far from simple, however, and businesses will likely need to lean on the expertise of their managed service provider.

In April 2020, the likelihood is that IR35 will be applicable to all medium and large businesses who engage contractors in their workforce. There are quite clearly concerns with the current setup, and the lack of current clarity from HMRC is far from ideal.

Is it too soon for the legislation to be implemented? Possibly. But that doesn’t change the fact that it’s a big priority of HMRC for 2020. Ultimately, it is time for businesses to start preparing as best they can for next year.

For more information on IR35 reform in the private sector, download Guidant Global’s latest report by filling out the form below.

How useful did you find this article?
Thank you for your feedback!
3.5 / 5.0
Back to blog listing
Share This: 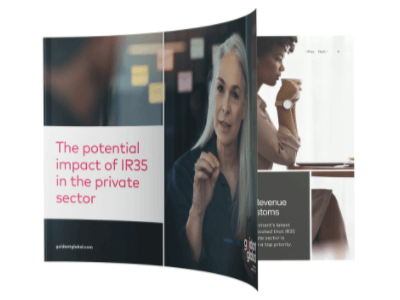 Download our free guide to learn how IR35 rollout in the private sector is going to impact you and your business.